A Note from Coach Tammi 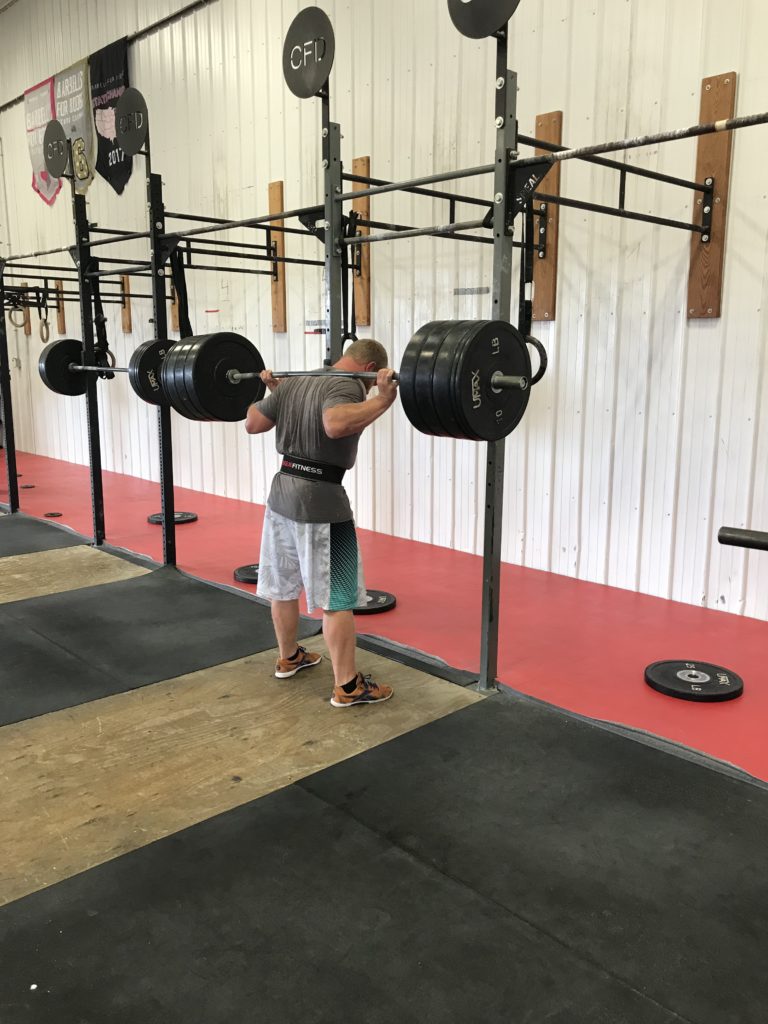 How long have you been a member at CFD, and what made you want to get started?

I’ve been at CFD for over 4 years now. I had a friend that was going to CFD while she was in town for college. Over the years of knowing her, I became good friends with a lot of her friends from school. They were all set to graduate in March 2014, which was only a couple of months away. She started to worry that after graduation everyone will move away, and I will have no friends left in town.

This is what she told me:

‘You’re an athlete, you work out, and you’re going to need to meet new friends. Everyone at CFD is super nice, and they all have the same goal of bettering themselves. They’re basically a big family. This would be such a good thing for you to do, and you’d be stupid if you didn’t at least try it.’

In March 2014 I started Foundations, and I’ve been going ever since.

What changes have you seen in yourself since your very first day?

When I first started at CFD I was probably around 245 lbs. I considered myself to be in good shape, but definitely not the best I’ve been in. My goal was to get back to that peak I was at. I wasn’t in a rush to hit my goal, so it took some time to get back to my peak strength, but I got there. I was moving weight that I haven’t moved in years. Hell, I even got stronger in some areas. I felt strong!

November 2017, I saw a picture of myself and thought I looked like I was holding a little extra weight on my frame (mostly the belly and face). I brushed it off until one day at work I stepped on to a loading dock scale, and it said 275. That’s 20 lbs heavier than I have ever been. At that point I knew I had to make some changes. I thought to myself I no longer need to be the biggest and strongest athlete. I don’t need to lift as heavy of weight as I do. Now I just need to focus on maintaining and preserving my body, so it doesn’t fall apart when I’m 35/40 years old. I decided that the first thing I needed to do was lose a healthy amount of weight.

Since December 2017 I’ve cleaned up my eating a lot. (I used to eat enough for a small family.) I was super strict on what I ate and drank (No booze) for 5 months. It’s only been the last 2 months that I have been a little lenient about what I consume, and that’s because it’s the summer. I haven’t changed any of my workout habits yet. I knew if I just stuck with what I was doing at CFD it would set me up to be in a good position to start my next goal.

In total I’ve lost about 40lbs since I decided to “restructure” myself. Let me tell you it is way easier to run and do pull ups/chest to bars. Not going to lie, I would never come to the classes that had running in them and now I don’t really mind them. I still hate running, but I know I’ll be able make it through the workout at a much better pace.

What did you do for fitness prior to CFD, and what do you like most about CrossFit?

Growing up I was always in sports and weight training. If you knew the background of my family you would know that not being active wasn’t an option. I was a multi-sport athlete for as long as I could remember. I tried most of the major sports, but stuck to ice hockey and football. Because of the sports I was in, I focused on training for strength and fast recovery. For strength it was all about the heavy weight, low reps, and big bursts of energy. They only cardio I did was during practices, so there was never a time that I had to lift and do cardio at the same time like the workouts at CFD. I really had to learn how to pace myself when I started CrossFit, and I still have trouble with doing it.

What type(s) of workouts are your favorite?

Anything that has some type of a press in it, except thrusters. I have horrible mobility in a front rack position, and I can’t move through them as fast as I’d like to.

What type(s) of workouts do you least like to see come up?

Anything that has a front rack position with a squat. Again, my mobility in the front rack is awful. I probably have the worst upper body mobility at CFD.

What are you goals going forward?

What advice do you have for someone just starting out at CFD?

Some say it’s not for everybody, but you won’t know until you try. If you’re use to lifting weights, play/played physical sports, and are looking to change things up I would try it. There is a good chance that you will enjoy it. If you have never worked out, or aren’t willing to work hard this probably isn’t for you. But, what’s nice about CFD is that they have Foundations class. Before you even start to do the normal classes, they have classes to introduce you to what you will be doing. Then they give you a ~2 month test run to see if this style of working out is for you.

You won’t know if it’s for you until you try it.

Not a member? Sign up for an Intro Class today!  The next Intro class takes place on August 4th at 10:00, and Foundations starts the next week (August 7th).
RSVP to the free Intro Class here!

CrossFit is the principal strength and conditioning program for many police academies and tactical operations teams, military special operations units, champion martial artists, and hundreds of other elite and professional athletes worldwide.

Our program delivers a fitness that is, by design, broad, general, and inclusive. Our specialty is not specializing. Combat, survival, many sports, and life reward this kind of fitness and, on average, punish the specialist.

The CrossFit program is designed for universal scalability making it the perfect application for any committed individual regardless of experience. We’ve used our same routines for elderly individuals with heart disease and cage fighters one month out from televised bouts. We scale load and intensity; we don’t change programs.

How do I start?

If you are interested in speaking to a coach and learning more about our philosophy on fitness and how we can help you achieve your goals, get signed up for an introductory class! New Foundations classes start the first full week of each month, so get in for your intro class to get signed up for the upcoming month’s classes!

Yes. But 'hard' is relative; it will be 'hard' for an elite-level athlete, and it will be appropriately 'hard' for an inexperienced or de-conditioned athlete. Nothing worth having comes easy. More importantly, what we do is appropriate, safe, and effective.

Each of our sessions are 100% guided and coached. Our classes are structured in smaller groups so that everyone is able to receive some individual attention. At times, we may bring in other trainers to help coach so as to not overlook anyone.

We will always begin with a dynamic warm up. This will usually consist of a few movements that ensure that the entire body is ready for the session. At this point, you should feel an elevated core temperature and maybe have a light sweat.

Next we work on skill moves. These include a variety of motions such as Olympic lifting, body awareness movements, or any number of others that fit into our programming. Coaching plays a big part in this section. Many of the movements we teach will be outside of the average skill set. Part of our goal is to broaden your base, constantly introducing new and different moves.

At this point we begin coaching the workout of the day (WOD). Often, the WOD will incorporate elements from the sessions’ skill work. After adjusting the WOD to each individual’s skill and fitness level, any last minute questions are answered. Then, it’s 3 2 1 GO! And we’re off!!

Do you track progress?

We do not track progress for you, but we offer you free services to help you track your own progress. With our WODHOPPER integration, you will be able to log your daily reps, times, and weights. Additionally, you are able to view the workout for the current day and see how everyone has performed.

How much does it cost?

Pricing varies depending on the number of classes you wanted to attend per week and which program you participate in. For detailed information, please visit our Programs section to learn about the details of each program we offer, and how much they cost.

Are the coaches qualified?

We pride ourselves in the knowledge of our trainers. Each and every one of our trainers are qualified to guide you along your CrossFit journey. We also believe that continuing education is paramount to the success our of members, so we help our coaches get any additional training that will advance their knowledge in the field.